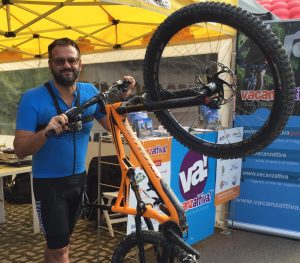 A nice bike ride starting from Bologna ‘s central square and arriving in San Lazzaro di Savena, a municipality that is now an extension of the Emilia capital in the direction of Romagna.

This route is very easy and also suitable for children: it runs almost entirely on a bicycle path from Piazza Maggiore to the eastern edge of Bologna, entering the municipality of San Lazzaro di Savena.
Thus, the bicycle route serves the people who live in this area of the city because it crosses it completely, partially following that famous road that runs through the region from west to east, namely the Via Emilia.

The de facto start is on the original old artery, which is now called Strada Maggiore but is part of the ancient Romanesque route. Next, we cross the area of theSant’Orsola Hospital, which is practically a small citadel, and then continue alternating between bicycle paths beside roads or on sidewalks and stretches in the middle of the various parks in the Fossolo area.

Arriving in the Mazzini district, take the pedestrian underpass that leads directly into Cedar Park, within which there are other paths, including dirt paths that run along the river, that reach the Parco dei Gessi and the Farneto caves.

Instead, if you continue along our route, you enter the center of San Lazzaro di Savena.

Technical description:
The route is very easy, there are no challenging sections, it can also be done every day by bike thus avoiding the car.
The first part is in the city, along traffic-calmed streets, then on bike paths and inside parks. Bicycle paths are almost always used and roads only partially.

Recommended period: all year round

Where to park:
The start is in Piazza Maggiore: access with cars is allowed only for residents, so you can park outside the Ztl and then cycle directly into the center.

Asiago – Villages and forests on the plateau

Ring of the Custoza Lands

The mountains of the Duchy of Urbino

From Vicenza by bike among the beauties of Palladio

The Lessini Mountains by bicycle

Asiago – The ‘little train road’ on the plateau

The Way of the Gods in Trekking – MULTITAPPA

The Way of the Gods in Trekking – Stage #4 classic route