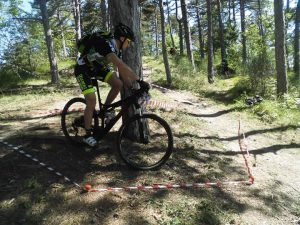 The third and final leg of this impressive MTB tour features the approach (along the Marecchia River bike path) and finally the ascent to Città di San Marino.

From Monte Cerignone, the first 5 km proceed uphill and then pedal along some ups and downs that lead to San Leo, with its picturesque fortress suspended on a rock ridge, overlooking the Valmarecchia. It is part of the Most Beautiful Villages of Italy circuit and was disputed between the Malatesta and Montefeltro. From San Leo it’s back downhill and, after a flat central section, the climb up Mount Titano to the Republic of San Marino begins, where the tour ends with a visit to the medieval historic center of the capital of the same name.